Tenjin Bridge, located near Hachikenyahama on Okawa River, an area lined with the storehouses of the Daimyo during the Edo period in a time when Osaka was called the “Water Capital” and was also the center of commerce in Japan known as “kitchen of the nation”, is the home of the “Tenjin Festival”, one of Japan’s three largest festivals famous for its boat festival. CAFE Osaka Chakai opened on August 30, 2016 in the Tenjinbashisuji Shopping Street, Japan’s longest shopping district, stretching 2.6 km from north to south from 1-chome to 6-chome, north of Tenjin Bridge.

Directly east of the cafe is the historic Osaka Tenmangu Shrine and the Hanjotei Comic Theater. The cafe, with its interior designed on the concept of “a retreat in the heart of the city” sits on the border of 2-chome of the Tenjinbashisuji Shopping Street that while sitting in the heart of the city, retains an elegant charm, and takes an unconventional and innovative approach to “Japanese tea and pottery”, something that is close to the heart of the Japanese yet something most people know little about.

We invite you to enjoy a pleasant dining experience at CAFE Osaka Chakai. 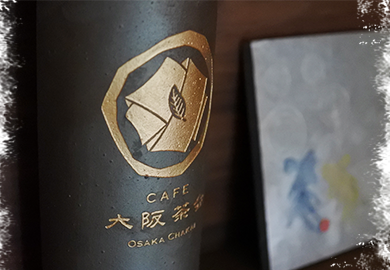 Enjoy your drink in a cup of your choice!

Visitors to Cafe Osaka Chakai can enjoy the drink menu from the cup of their choice, with over 100 different varieties to choose from on shelves that line the interior. Cups include mug cups, matchawan (traditional tea bowls) and free-style cups made by artists from western Japan. These cups are changed every month and season so you can enjoy a variety of cups from Japan, a country renowned for its pottery and earthenware.

Bookshelf introducing the culture of Japan and Osaka

The cafe also boasts a range of books about pottery, traditional Japanese tea ceremony, and some of the famous sights around Osaka for your enjoyment. We even have a collection of English books for the enjoyment of our international visitors. 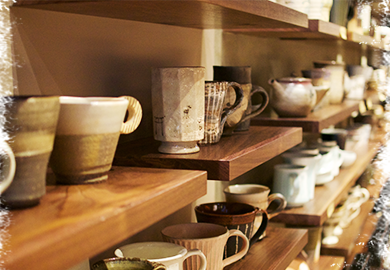 Situated on the bustling street amidst Japan’s longest shopping district, “Tenjinbashisuji Shopping Street”, the interior design is based on the concept of “a retreat in the heart of the city” where visitors can escape the outside world and relax in a home away from home. Just as the phrase suggests, “a retreat in the heart of the city” refers to a place of refuge in the city and is an expression coined from the spirit of traditional Japanese tea ceremony, an art mastered by Sen no Rikyu. From that time onwards, this concept has existed as a space where people can take time out, away from the hustle and bustle of the city; the rigors of everyday life, and today is are widely used as a design concept for gardens and commercial spaces in the city.
The interior walls and lighting incorporate a Japanese flavor and materials, including the traditional Japanese craft of Japanese paper, gold and silver leaf art, lacquered brass and Japanese black bamboo to create a comfortable, chic casual interior for total relaxation. 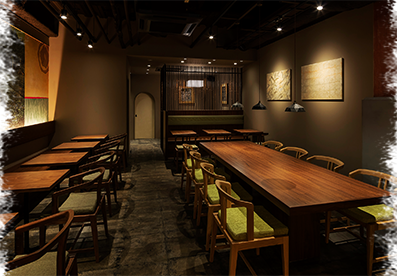 Our ultimate aim is for visitors to have the best time possible and experience a sense of communion, a coming together of Japanese aesthetics and culture that over time have cultivated a unique sense of refinement, a communion of sensitivities that transcends international borders, a communion of the old and new, the East and West, etc.

We have already had visitors from 30 countries around the world and had them place a sticker indicating their country or place of origin on a globe that occupies our interior. 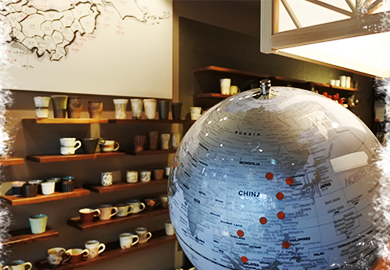 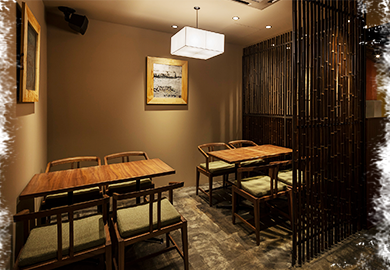