Green tea leaves are freshly ground to make “freshly ground ryokucha” for all items from our original drink menu and part of our dessert menu. 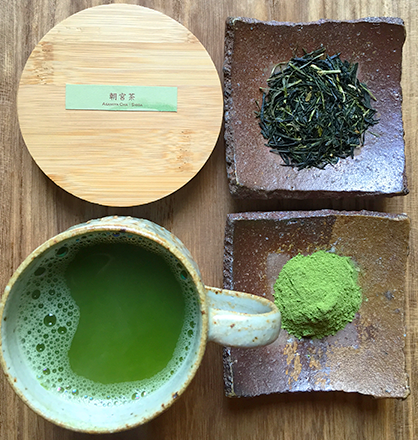 One of Japan’s oldest green tea varieties made since the 800’s, 1,200 years ago in the Asamiya region, located to the south of Biwako Lake in Shiga prefecture, 3-400 meters above sea level in the Shigaraki Basin located close to the prefectural boundaries of Kyoto and Mie prefectures. The photo of the tea plantation mounted on the wall of Osaka Chakai is a mystical shot of the tea plantation taken in Asamiya in March 2016. 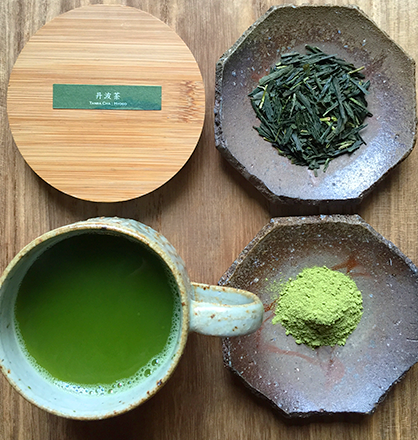 Tanba Cha has been made since the 800’s, 1,200 year ago in the Tanba Sasayama region, one of Japan’s most historical tea growing regions located in the central eastern part of Hyogo prefecture, an area that is also noted in the “Nihon Koki”, a historical text of Japan written at the time. The Tanba Sasayama region is famous for its black soybeans and chestnuts grown in its fertile soil however the green tea grown in the basin, with its drastic temperature variation, is also known for its rich aroma and flavor.

We also serve black soybean ryokucha (green tea) made by Honke Kumanoen, a blend of roasted green tea powder made from carefully selected Tanba Cha and black soybeans from Sasayama. 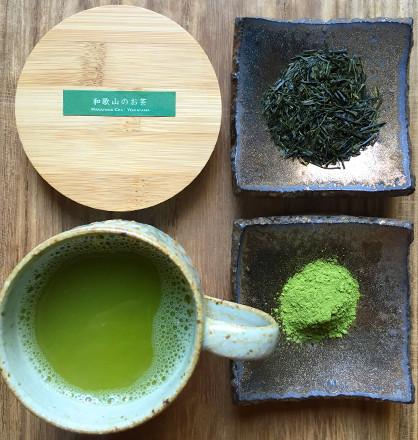 Nachikatsuura-cho in the Kumano region, a World Heritage listed area of Wakayama is the most southern tea growing area on Japan’s main island, Honshu and has been growing tea since the Muromachi period, more than 1,200 years ago.
Green tea grown 500-700 meters above sea level under the southern sun in the Kii Mountains, a mountainous region with high peaks and low valleys, is packed full of all the goodness of nature.

Kagoshima Cha is made by “Komaki Ryokuhoen”, a tea plantation in Minami Satsuma on the island of Kagoshima, Kyushu’s largest tea growing area and famous for the Minami Satsuma Ocean Road facing the west coast of the Satsuma Peninsula. Long ago, Minami Satsuma had contact with countries from across the seas, and along with its famous locations along the coast, such as Bonotsu, the site Chinese Buddhist monk, “Ganjin”, landed and from which he propagated Buddhism in Japan during the Nara period and Fukiage Beach, one of Japan’s three largest beaches, it is also known as a tea growing area. Kagoshima Cha is characterized by its rich, full-bodied flavor developed with the help of the abundant sunlight of Minami Satsuma.

We also offer Kagoshima green tea infused chocolate, made specifically for Osaka Chakai by “Ek-Chuah”, Osaka’s premium chocolate brand for you to enjoy.