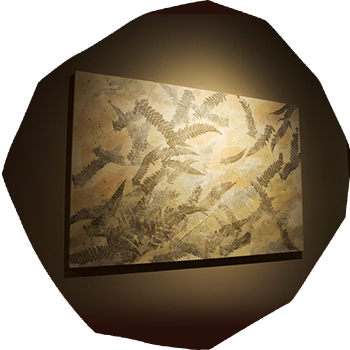 30 years have passed since leaving the Netherlands to live in Japan, and he now creates Washi (traditional Japanese paper) artworks starting from the production of “Kozo,” the raw material for Washi, in Yusuharacho, Takaoka Gun in Kochi near the prefectural boundary with Ehime where Sakamoto Ryoma passed through when he deserted the Tosa Domain. He also produces “Waranshi,” a fusion paper made by blending the raw materials for Washi and western paper made from cotton from the Netherlands, his homeland, which is also used in the restoration of European paintings.

Personal History
1980 Arrived in Japan, visited and observed handmade Washi studios across the nation
1981 - 1992 Went into apprenticeship in paper making while growing Kozo in the former Inocho in Kochi
1989 Held the first solo-exhibition in Kochi City
1992 Moved to Yusuharacho and established a papermaking studio “Tengu No Kaze”
1993 - Gave classes on Washi-making for the students of elementary schools in Yusuharacho
2003 Began production of cotton recycle paper
2006 Opened “paper-making workshop and guest house Kamikoya”