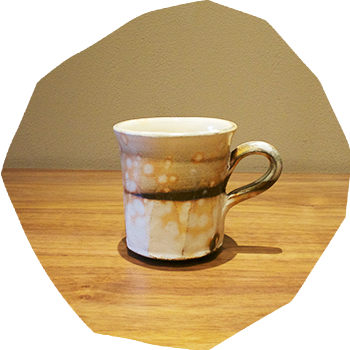 The attractiveness of his artwork derives from the tenderness and warmth of powder spray seasoned with its sharp excellence. Mugs displayed on the Choice Shelf are particularly popular with our female guests for their avant-garde and stylish form, while the faint shade of traditional Hagi ware expresses delicacy and grace.

1985 Born in Yamaguchi City as the second son of Kiyoshi
2006 Graduated from Osaka College of Art in Association with Osaka University of Arts, and began creating pottery under his father Kiyoshi

2011 Exhibited artworks in Shimonoseki Daimaru Exhibition (2015)
2012 Won the grand prize of the “Tea Ceremony Arts Exhibition” of the Tanabe Museum of Art, held a solo-exhibition at Izutsuya Yamaguchi (and group exhibitions every year ever since)